Step 1: Prepare your barbecue for indirect cooking and heat to a temperature of 115 ° C.

Step 2: For the chimichurri, place the bell pepper on the barbecue and roast the bell pepper until the skin is blackened all around. In the meantime, remove the tough membrane on the side of the ribs from the short rib. To do this, insert a Phillips screwdriver between the rib and the membrane and make a winding movement to pull the membrane off the ribs. Cut away some of the layer of fat and film that may be on the meat side with a small knife; leave some of the fat, after all, fat is taste.

Step 3: Sprinkle the short rib all around with the Smokey Goodness Beefalicious Rub and press it slightly. Place the sweet potatoes on a sheet of aluminum foil, sprinkle with salt and pepper and fold the foil up.

Step 4: Remove the roasted bell pepper from the barbecue and let it cool covered. Remove any accessories for indirect preparation and place the hickory chunks between the glowing charcoal. Reinstall the accessories for indirect preparation and place the short rib on the side of the ribs, together with the wrapped sweet potatoes on the grid. Close the barbecue lid and keep it at a constant temperature of 115 ° C.

Step 5: Meanwhile, make the chimichurri. For this, peel the roasted bell pepper, remove the stalk and the seeds and finely chop the flesh. Mix with the other ingredients for the chimichurri and add salt and pepper to taste.

Step 6: Check the potatoes are soft after 2 hours and remove them from the barbecue, do not open the lid earlier. Allow the sweet potatoes to cool slightly and allow the short rib to cook 4-6 hours longer until it has reached a core temperature of 90 ° C. If you want, you can wrap the short rib in butcher paper after a total of 4 hours. This speeds up the cooking process without affecting the structure of the meat too much.

Step 7: Halve the sweet potatoes when they have cooled slightly. Remove the flesh from the skin and finely chop it with a fork. Mix in the butter and season the mash with salt and pepper.

Step 8: Remove the short rib from the barbecue when it has reached the core temperature of 90 ° C. Leave in the butcher paper for 20-30 minutes or cover loosely with aluminum foil if you have not used butcher paper. Meanwhile, heat the skillet on the grill of the barbecue and heat the sweet potato puree in it.

Step 9: Cut the short rib in four between the ribs and serve with the mash and the red chimichurri. 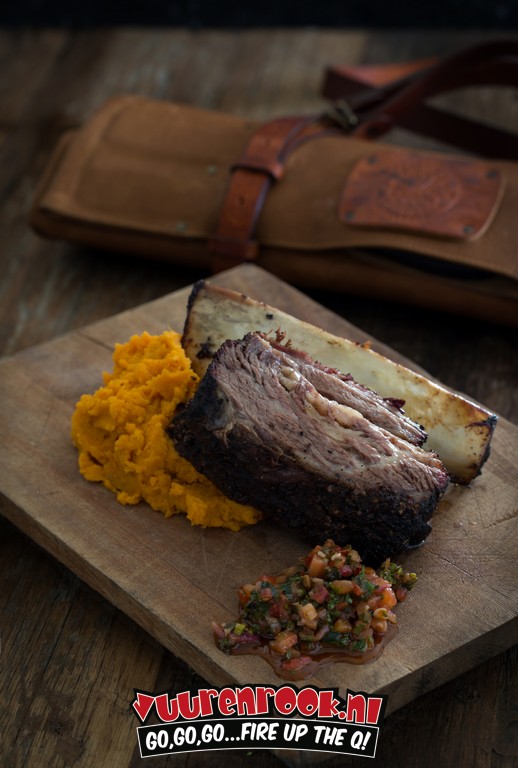