Black Friday Madness; you have only...

Rendang from the Dutch Oven

Rendang comes from the Indonesian word merandang or randang, which means slow. According to tradition, Rendang was first made in West Sumatra, by the Minangkabau people. We are talking about the 8th century. The Minangkabau saw three stages in cooking rendang. It starts out like Gulai, with a wet sauce. With further stirring over low heat, the sauce reduces to what is referred to as Kalio, which is thicker and browner than the Gulai. Finally, the meat is further cooked until all the sauce has been absorbed. That's when the rendang was born. In many restaurants, especially in restaurants outside West Sumatra, rendang is served in the moist form, i.e. in the Kalio phase. But it is only when the meat is dry cooked that it is the traditional Minangkabau rendang. For the Indonesians, cooking rendang is almost a religious experience. According to them, the long cooking process at a low temperature makes it a dish that teaches you patience, wisdom and sincerity.

Step 1: Put the onions, chilies, roasted kemiri nuts, the cleaned turmeric and the cleaned cloves of garlic in a blender and grind. While grinding, add a little oil until you get a smooth bumbu.

Step 2: Cut the meat into large dice. Light the campstove but keep the heat moderate. Place the DO on the stove.

Step 3: Put the rest of the oil in the DO and fry the meat until it is brown. Then remove the meat from the DO with the slotted spoon and set aside.

Step 4: Then put the bumbu in the DO. If there is too much moisture left in the DO from roasting the meat in the DO, pour it out first. Spoon the bumbu in the DO and fry it until the onion has discolored. Then add the djeroek purut, salam leaf, cinnamon stick, bruised lemongrass and bruised galangal to the fried bumbu. When the odors are released, the meat can be returned to the DO. Let the mass heat through. Put the lid on and remove the DO from the campstove.

Step 5: Then put the skillet on the stove and roast the djinten and ketoembar seeds plus the salt until the seeds start to pop. Put the herbs in the mortar and rub until it is a fine rub. Add this to the meat and stir.

Step 7: First add the coconut milk to the beef in the DO and then add the coconut paste. Stir everything well, put the DO back on the heat and let the rendang simmer for a few hours. Check occasionally that it is not getting too dry, then add some water. But be careful, it shouldn't be too dry either. Rendang is a dry simmering dish. 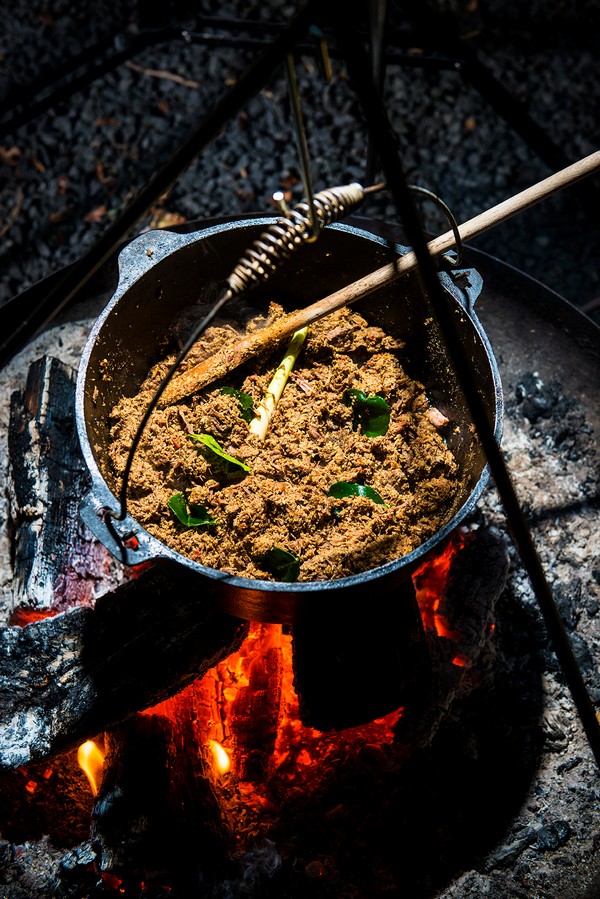