Step 2: Take a pan and add the milk, sunflower oil, and 50 grams of the sugar. Heat it until it is lukewarm and then remove the pan from the heat. Add the yeast to the pan and let it stand for a while.

Step 3: Meanwhile, take a large mixing bowl and add 260 grams of the flour. Then add the contents of your pan and mix it well with a spatula. Cover the bowl with a damp tea towel and let it rise for an hour.

Step 4: Remove the tea towel from the bowl after an hour and now add the remaining flour, baking powder and salt. Mix the new ingredients well into the dough.

Step 5: Now roll the dough well into a thin piece of 50x30 cm. Coat this piece with melted butter. Then divide the remaining 50 grams of sugar and cinnamon over the dough and then roll it up so that you get a rolling pin of 50 cm long. Cut this roll into 1.5 to 2 cm thick slices with a sharp knife and place it in the cast iron pan. Leave some space between the rollers so that they can expand during baking. Cover your pan with a damp tea towel and let it stand for 20 minutes.

Step 6: In the meantime, the BBQ is up to temperature. Bake the Cinnamon Rolls for 15 to 20 minutes until golden brown and done.

Step 7: In the meantime, it's time to make the cinnamon rolls topping. For this, take a bowl and mix the monchou with the soft butter, the icing sugar, the vanilla extract and the lemon juice.

Step 8: Remove the Cinnamon Rolls from the BBQ when they are cooked. Let them cool a little and then remove them from the pan. Cover them with the cream cheese topping and serve while they are still hot! 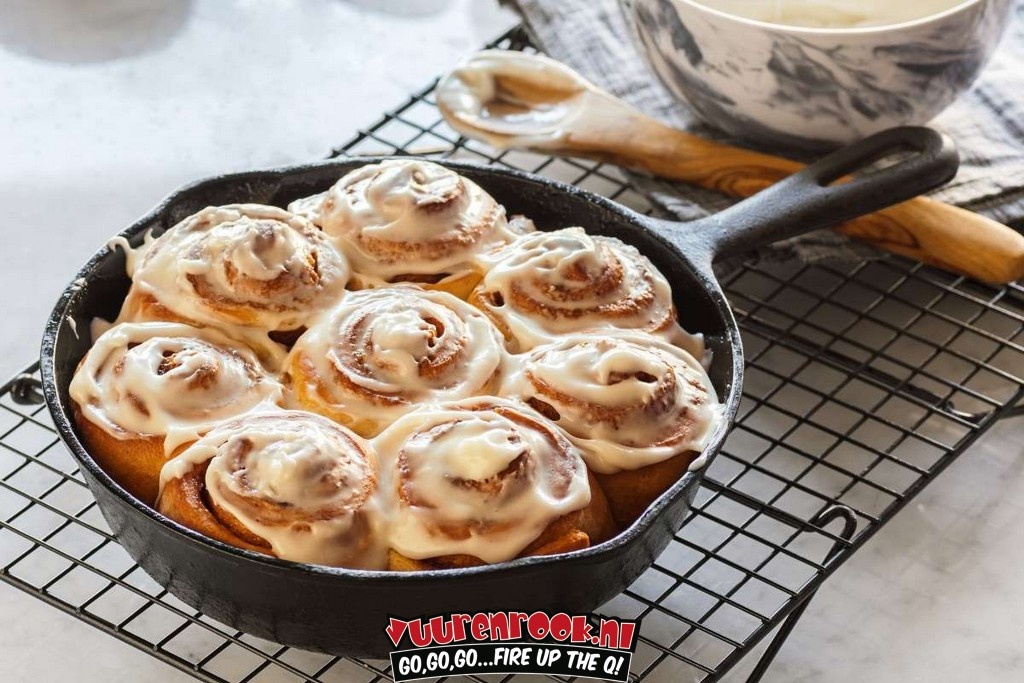